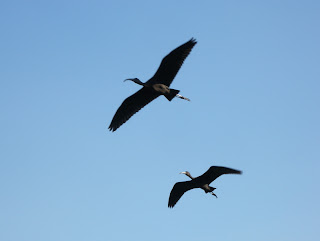 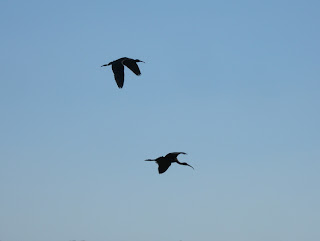 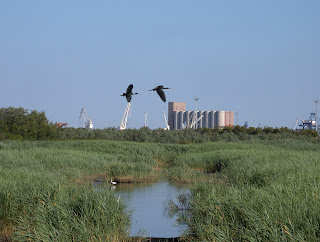 Škocjanski zatok NR: the highlight this morning were 2 GLOSSY IBISES that I only managed to see in flight when they moved from one feeding area to the other. The two birds fed in some shallow pools hidden by tall reeds, so were impossible to see after landing. Fortunately they moved quite a lot and once also approached the screening so closely that I didn't need the scope to take the above pics. The species is a rare passage and summer migrant at the reserve. On a national (Slovenian) level it is also pretty rare.
Apart from the local breeding Little Bitterns (1 male seen) and a female Pochard (probably bred in the area), a few migrant waders were of note. The first 4 Lapwings of the autumn have appeared along with a few Wood Sandpipers. Still lots of other commoner waders including Redshank, Greenshank, Common Sandpiper (+22), Green Sandpiper (1), Little Ringed Plovers and so on.

Yesterday afternoon I had an interesting sighting above Duino (Trieste) which involved a SHORT-TOED EAGLE soaring and hovering on the southern slopes of Mt. Grmada. Nearby were also 2-3 quite showy Honey Buzzards.
Posted by Domen & Sara at 03:28