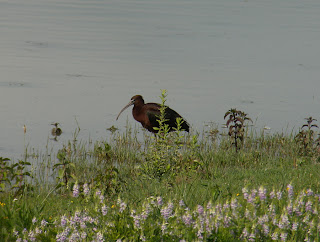 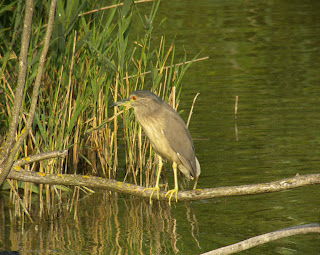 Been to Isola della Cona NR yesterday afternoon and got a nice selection of late firsts-of-the-year. It's pretty odd but things like Squacco Heron and Little Bittern were the firsts, mainly because of my lack of visits to wetlands this spring. Well, better late than never. Yesterday two pairs of Little Bittern showed briefly in front of the two main hides, doing some brief flights between patches of reedbed and perching in the open for a few seconds. Squacco Herons were seen later at the heron roost, where about 3-4 birds were present. Nice to see also all the other species of European herons (except Bittern): 2 Purple, +10 Night Herons (2nd above), Great, Little and Cattle Egrets and the usual Grey Herons.
However the main afternoon's highlight was not a heron but a GLOSSY IBIS (1st above). It showed well in the freshwater marsh for most of the afternoon before flying around a few times and then definitely heading east towards the estuary. This one was also a year's first.
Otherwise the area held the usual array of species with actually good numbers of waders for this season (I didn't really expect so many). The most obvious of the migrants were Spotted Redshanks (about 20) all in nice black breeding plumage (except one individual). Also several (up to 10) Wood Sandpipers and good numbers of Green Sandpipers. A few Little Ringed Plovers were also around, along with 3 Curlews and the most common waders: Black-winged Stilts (with lots of juveniles). Other birds included also: 15 Spoonbills, 1 Kingfisher, 1 Cuckoo (still singing), Great Reed & Reed Warblers, Lapwing, 2 Garganeys, 1 male Pintail and several commoner dabbling ducks.
The Bee-eater colony is still active with the usual great views of the birds, sitting on the perches in front of the first screening.

A brief visit to Lisert produced the breeding pair of RED-RUMPED SWALLOWS, 2 Peregrines (prey exchange in mid air!), 1 Ferruginous Duck, 1 Pochard, a Marsh Harrier and some Melodious Warblers.
Posted by Domen & Sara at 00:20