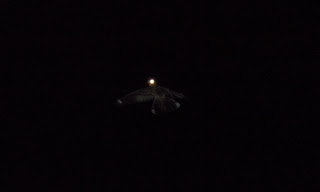 Local patch: yesterday night was goatsucker time spent on the cliffs and driving around the Karst. About 6 Nightjars recorded in total with two also seen quite well (2 were in the patch area). One particular bird seen up on the cliffs at dusk performed well while there was still good light: it circled for a while in the air, giving the "kuik" call, then landed on a dead branch and sang there for a few seconds, before taking off again. In flight it appeared quite odd to see against a light sky background. Also quite a lot of wing clapping, usually performed at the end of the song, when the bird takes off.
Completing the dusk (and later night) chorus were also about 5 Nightingales, a few Blackbirds and a solitary Robin. Quite a lot of Roe Deer activity including loud barking.
On the daytime front just the usual bird sounds of the season, heard from home: Nightingale, occasional Golden Oriole, Nuthatch, Green Woodpecker, Scops Owl. A Sparrowhawk yesterday was the first in a while...I don't see them so frequently in this season.
Posted by Domen & Sara at 10:30