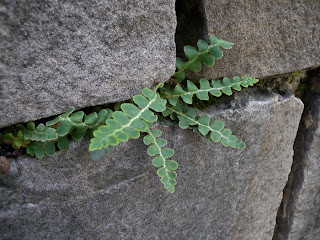 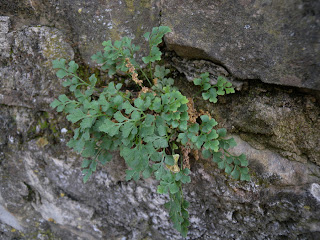 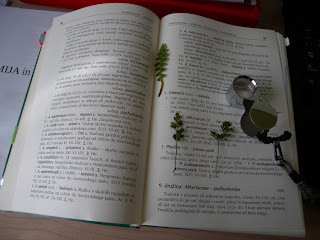 Local patch: it's very quiet here and also due to the lack of time for any serious birding, I'm turning to my botany side these days. More precisely to fern ID. Yesterday I just pulled out a few ferns from the walls in the neighbourhood and identified them. Quite common and easy-to-tell species though: Ceterach officinarum (above 1st), Asplenium trichomanes and Asplenium ruta-muraria (above 2nd).
The other day I had a male Honey Buzzard catching a thermal above the woodland, along with a Raven, but otherwise it's pretty much the same old stuff (Black Redstart, Nightingale, occasional Golden Oriole ect.).
Today instead I was happy to see a Hoopoe flying over a road near Opčine with some food in the beak. Unfortunately it was outside the patch boundary so it won't go on my patch-yearlist. Real pity.

Škocjanski zatok NR: this morning I also had a small guided walk around the reserve with a bunch of schoolchildren. The weather was miserable so we only checked the freshwater marsh. In between the rain showers I managed to see a Hobby dashing thorough the wetland, a few Sand Martins, 1 Marsh Harrier and heard a Marsh Warbler (my first this season)...that eventually ended into the ringer's net. So we had a look at it at least in the hand. Also around were tons of Reed, Great Reed and a few Melodious Warblers, as usual in this season. Also a Pygmy Cormorant perching on the highest tree in the area.

Meanwhile at Isola della Cona NR...someone found this (!!). Unfortunately the news was put out quite late, otherwise it would be already on my list!
Posted by Domen & Sara at 10:55