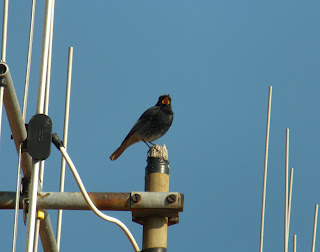 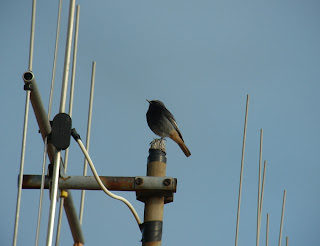 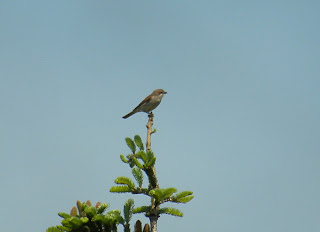 Local patch: it's been a relatively calm week since today when I found a nice migrant RED-BACKED SHRIKE in the garden. The female bird landed on a high conifer and remained there for several minutes (last pic above). It's always a pleasure to find a Red-backed Shrike in the patch, even if it's not a real rarity in the area. I suppose they are more or less annual here, but still a bit scarce.
Today the atmosphere was that typical of late spring and the other highlight were 2 Honey Buzzards (females), flying along the karstic edge and about 4 Common Buzzards catching a thermal.
The most interesting birds I use to see or hear on a daily basis now also include Golden Oriole, Nightingale, Long-tailed Tit (pair breeding in the area), Serin, Common Swift & House Martin and a nice male Black Redstart. The latter has a stable territory right around my house and usually sings from the rooftops, chimneys or TV aerials of the surrounding buildings (first two photos).
Yesterday I also heard a singing Wood Warbler from the nearby deciduous woodland and this year's first Hedgehog (Erinaceus concolor) was roving around our local road at night.
Posted by Domen & Sara at 11:44