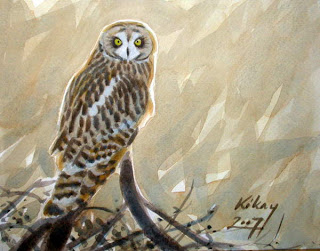 Yesterday afternoon I spent some time on the dry meadowland called Magredi, near Pordenone. The extensive open areas were covered in flowering orchids (mostly Orchis morio, Neotinea tridentata and Ophrys sp.) and other wildflowers. The highlight of the day came as a bit of a surprise: a SHORT-EARED OWL hunting at dusk above the meadows. It first took off from an earth heap in a field were it was perched and then began to fly around. The light was still good enough to see it well for some minutes.
Almost at the same time the local STONE CURLEWS performed a "dusk chorus" with about 4 or 5 birds calling. One was also seen in flight and 4 birds were seen earlier in the afternoon.
A nearby singing Nightjar was also exciting to hear as it was the first for me this year. Singing Common Quails, Nightingales, Cuckoos and Corn Buntings added a bit of atmosphere to the dusk chorus.
Earlier in the afternoon two first-of-the-year Hippolais were heard: a singing Icterine Warbler and a Melodious Warbler.
The area held a good variety of grassland and woodland species including: Whinchat, 2 Hoopoes, Lapwing (territorial displays), Golden Oriole, 2 Marsh Harriers, 3 Hobbies, Skylark, 2 Montagu's Harriers (both females), 1 Sedge Warbler (clearly a migrant), Stonechat, 1 Wryneck, 1 Black Kite, Red-backed Shrike, Woodlark, Crested Lark, 2 Common Whitethroats, 1 Spotted Flycatcher and 1 Scops Owl singing in the evening.
Short-eared Owl by Szabolcs Kokay
Posted by Domen & Sara at 02:34