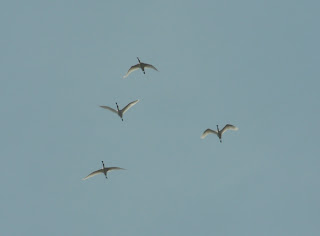 Local patch: yesterday it was a good day for migration so I headed up to the cliffs. Amazingly the area managed to produce yet another two new species for the patch list. The first was a CRAG MARTIN flying past the cliffs, followed 5 minutes later by 4 SPOONBILLS migrating east! I managed a pic of the latter (above). This rises the patch list to 158 species. Not bad at all.
Later in the afternoon a flock of 35 Curlews heading east was also pretty unusual. But this seasonal movements happen once or twice every year, so I wasn't that surprised after all.
The first 2 returning Nightingales for the patch were singing down in the wood - one showing so well, because of the complete lack of green leaves on the bushes. The poor bird looked a bit out of place.
Also the first Lesser Whitethroat this year in the patch, +6 Willow Warblers, 2-3 Chiffchaffs (singing), +50 Swallows, single House Martins, 8 Alpine Swifts, 1 Siskin (overhead), Blackcap, 1 Serin, 1 Tree Pipit, 1 Yellow Wagtail (flew past - only the 2nd for the patch), 2 Rock Buntings, 1 Song Thrush, 2 Crested Tits.
A nice male Blue Rock Thrush was finally on territory, performing a song-flight in front of the cliff faces.
Raptors included 1 Goshawk soaring together with a Sparrowhawk, 2 Marsh Harriers (m & f migrating E), 1 Kestrel and 3 Buzzards. The local pair of Ravens seemed to be a problem for the Alpine Swifts, as they kept alarming when the corvids were in the sky.
Euphorbia wulfenii now in full bloom all over the cliffs 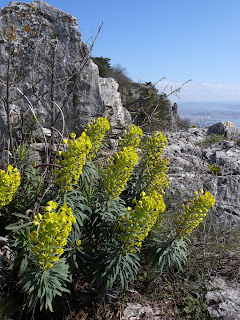 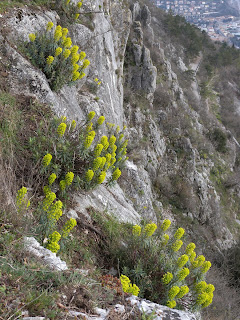