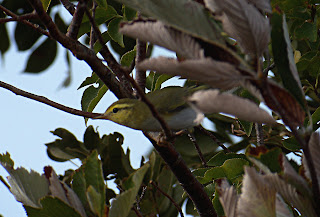 Local patch: had several singing Wood Warblers around the patch today, including one heard from home. The last sibilatrix in my home area was several years ago, so today I was quite pleased to hear it again. And it was also a patch year-tick by the way.
A male Whinchat was still present in the garden (orchard actually) and a singing Black Redstart was performing on a roof. Not much else though... Plenty of Common Swifts & House Martins in the air, but still no big flocks of migrant hirundines.
Yesterday also a female Kestrel and two Ravens (local pair) were of note, together with a fly-by Linnet.
Posted by Domen & Sara at 10:29