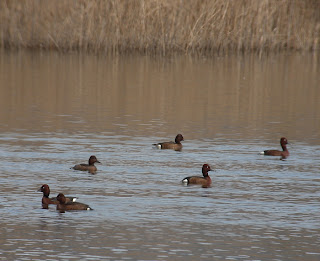 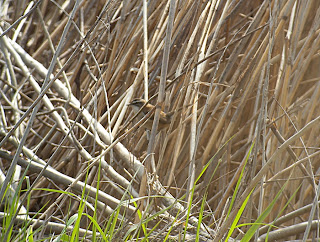 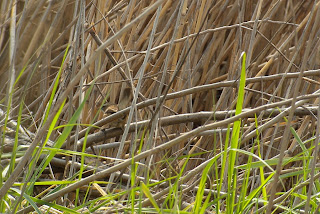 Spent an hour and a half for "lunchtime break" at Lisert today. I was told that the situation was quite lively in the morning, so being in Monfalcone, I couldn't skip a visit. There was indeed some movement in the hedges and after a while I managed to find some migrants. A female SUBALPINE WARBLER was a first of the year, so I was quite glad. It is actually a typical species to see in the first week of April. Overhead I was greeted by the first Sand Martins and there were a few Swallows and House Martins as well. But not in such big numbers. Earlier in the morning I also had a flock of about 20 Alpine Swifts above Monfalcone.
As I was walking towards the freshwater pond, I flushed a nice Bittern that was perching somewhere literally on the edge of the railway line! Nearby were also two singing Moustached Warblers of which I managed to see one quite well. Taking a picture was another matter though... I gave it a try - see the last two pics.
The inner pond was stuffed with birds, which were mostly noisy Little Grebes, but also 28 Ferruginous Ducks (first pic) and at least 10 Garganeys.
Other migrants around were 3 male Wheatears, 2 Willow Warblers, 6 Stonechats, 2 Yellow Wagtails, Song Thrushes, Chiffchaffs (very common), Meadow Pipits, Black Redstarts (still everywhere) and Robins (never seen so many Robins in a day!).
Other birds of note included also 2 Spoonbills in the saltmarsh (first time I see a Spoonbil here), +10 Black-winged Stilts, 2 Little Ringed Plovers, Common Redshank, Greenshank, Snipe, Curlew, Marsh Harrier, Penduline Tit and so on.
A friend of mine also had the first Common Terns this morning and a Grasshopper Warbler.
Posted by Domen & Sara at 11:39