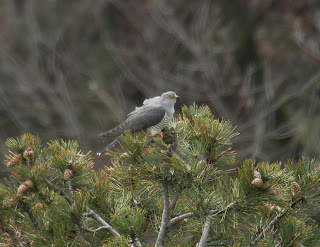 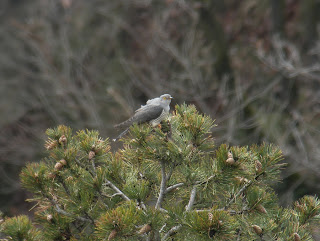 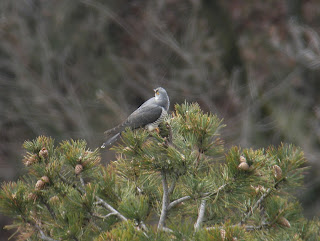 Local patch: today I had a pleasant afternoon up on the cliffs with a couple of friends. There was migration going on steadily, even if it was still a bit cold due to the persisting northeasterly. Doubtlessly the best bird of the day was a stunning male CUCKOO that flew up from the sea and landed on the top of a pine, showing superbly for several minutes (see above). A perfect year's first on the first day of April!
As I said there was a good migration movement with also one or two Willow Warblers in the bushes - another first, along with the abundant Chiffchaffs (also singing), Robins and Black Redstarts. About 10 House Martins were flying in circles very low in front of the cliffs and Swallows were passing by almost constantly today. In the morning from home I could see Swallows flying along the coast (heading NW) with a rate of 8 birds every 3-4 minutes.
Mixed among the numerous Chaffinches, Goldfinches and Song Thrushes were also several smaller groups of Linnets (2 also in the garden today), Meadow Pipits and Serins. Also around were two fly-by Mistle Thrushes, a Rock Bunting, a few Hawfinches, a singing Marsh Tits and commoner woodland birds. A flock of 22 Cormorants flew NW, low over the sea early in the afternoon.
Raptors included 1 female Kestrel, 4 Sparrowhawks (2f & 2m) and 1 Buzzard. Also several migrant Marsh Harriers were reported today over Trieste, but I had no luck with those.
Today we also discovered the precise nest site of the local pair of Ravens that chose to breed on a small cliff ledge. We watched the two birds coming down to the nest in turn, probably to feed each other...or maybe the chicks. I'll see in the coming weeks how's the situation going.
In the nearby woodland also a mother Wild Boar with 4 or 5 young piglets and a Roe Deer close nearby.
Earlier today I saw again the odd-looking BLUE ROCK THRUSH...this time sitting on the neighbour's rooftop! After a few seconds it dropped down in the same garden as yesterday.
A flock of 90 Woodpigeons migrating NW was also of note. And the sea held still 4 Black-necked Grebes and a Med Gull.
Posted by Domen & Sara at 12:46