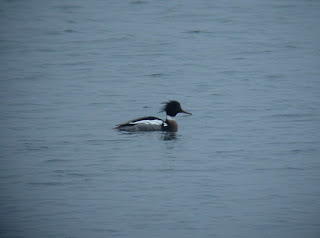 Local patch: not much serious birding in the last days (mainly due to rainy weather and fog) but a couple of good birds were around though: 1 Red-throated Diver, a pair of Red-breasted Mergansers (male above), 1 Kingfisher on the quay (always good to see in the patch), 2 Cormorants, 1 Black-necked and 4 Great Crested Grebes (breeding plumage) and a mixed flock of +100 Black-headed and about 16 Common Gulls. There seemed to be no flocks of wildfowl on the sea and early migration has now stopped with the bad weather.
Yesterday I also caught a glimpse of a compact flock of 250-300 Starlings flying NW. Unusual to see such a big flock in this season. The other day a very nice bird for the garden was a female Firecrest, feeding on one of the cypresses. One or two Coal Tits are still present in the garden (at the feeders) along with Dunnock and decreasing numbers of Chaffinches.
Posted by Domen & Sara at 06:11