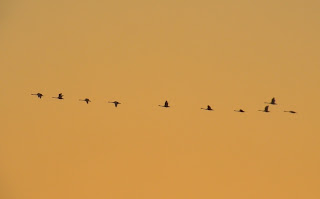 Local patch: wildfowl and waterbird migration is still going on these days. A flock of +50 vocal WHITE-FRONTED GEESE migrating east over the karstic ridge (16.25) was the main highlight today. Later I had a look from my terrace across the sea and also had 10 Mute Swans flying SE (above), a mixed group of 6 GREAT EGRETS (4th for the patch) and 4 Grey Herons going E and good numbers of unidentified wildfowl migrating SE over the sea (most probably Wigeons). Up in the sky above the coast there was a very noisy "thermal" of about 100 Common Gulls that kept circling around the gulf all the time. It was quite impressive to see and also to hear.
The sea also held 1 Great Crested Grebe flying S and 1 Sandwich Tern passing by.
Other spring wildlife seen today included a few Red Admirals, 1 Nettle-tree Butterfly in the garden (year's first) and 1 Large Tortoiseshell. I also took a stroll into the woodland and checked a small local pond which held the first Smooth Newts (up to 5). The woodland was otherwise quiet with the usual birds around: Short-toed Treecreeper, Marsh Tit, Nuthatch, Green Woodpecker, Sparrowhawk, Buzzard ect.
Posted by Domen & Sara at 10:22