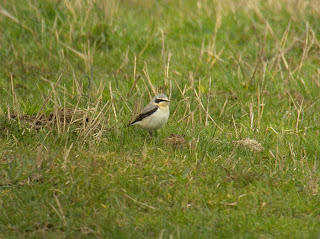 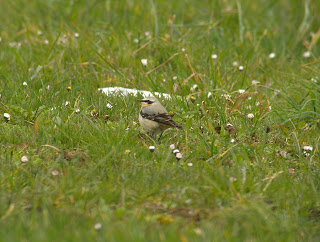 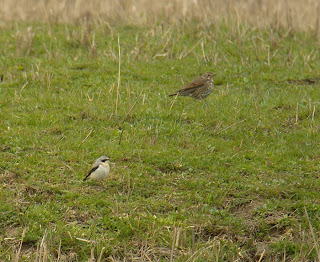 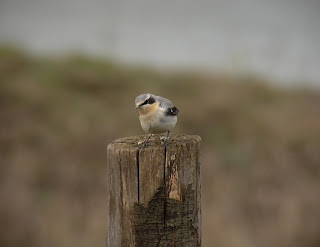 Škocjanski zatok NR: still pretty cold this morning with a stiff northeasterly and cloudy skies. Most probably these proved to be good conditions for a little fall of passerines. From the above photos you can see that WHEATEARS were the main subject of the day. These handsome little migrants were present in almost every part of the reserve, but mainly concentrated on the grazing marsh. I counted at least 16 birds in total of which just 3 or 4 were females. Another year's first was a very welcome Common Swift drifting over the freshwater marsh and heading east.
The skies were not properly full of hirundines, but about 20 Swallows and 10-15 House Martins were present.
But migration was especially evident on the ground, where along the Wheatears were tens of Song Thrushes (3rd pic above), Robins, White Wagtails and Black Redstarts (last pic above).
Other birds of interest included: 7 Pygmy Cormorants, 1 Gadwall, 30 Wigeons, 56 Shovelers, 162 Teals, 2 male Garganeys, 2 Ferruginous Ducks (m & f), 1 Tufted Duck, +6 Marsh Harriers (usually hunting over the reeds), 1 Kestrel, 5 Black-winged Stilts, 8 Little Ringed Plovers, 2 Ruffs, 4 Common Redshanks, 2 Dunlins (1 in the lagoon and 1 in the marsh), +18 Skylarks, 9 Water Pipits (in nice breeding plumage), 7 Yellow Wagtails (all cinereocapilla males), 6 Stonechats, 1 Fieldfare, 1 Mistle Thrush, 1 Serin (year's first), 8 Chiffchaffs, Penduline Tit and Reed Bunting.
While scanning through the grazing marsh, at one point I had a Fieldfare, a Wheatear, 2 Song Thrushes, 1 Yellow Wagtail and 1 Little Ringed Plover all in the same scope's field of view! One of those magic spring days...
Posted by Domen & Sara at 10:52