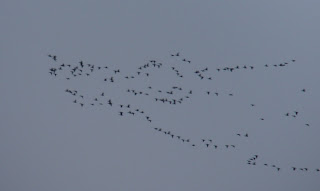 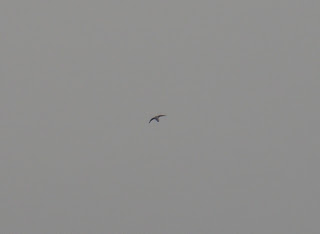 Local patch: this morning an approaching rainstorm from the south-west brought some movement. Four HOUSE MARTINS flying overhead were the most welcome sight, along with a Peregrine soaring high in front of the cliffs (which put on show for about 15 minutes - above). The "raft" of 45 Shelducks was still present on the sea this morning, right in front of Barcola. Later they moved south-east and were seen even more towards Trieste in the late afternoon.
Today I managed to identify the bigger flocks of ducks on the sea (at dusk) which were mainly Wigeons, as I initially supposed (see first pic). About 10 Shovelers were also present in a separate flock and yesterday I spotted a few Pintails as well.
The calls of Common Gulls are audible almost every time I step out of the front door (yesterday also at night). Other birds of note included the two Red-breasted Mergansers (m & f) still present at Miramare, 3 Black-necked Grebes in breeding plumage and about 50 Great Crested Grebes in loose flocks on the sea.
Posted by Domen & Sara at 11:47