MAGIC day in the patch! 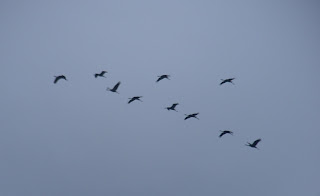 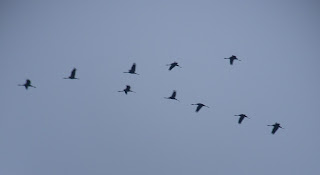 Local patch: absolutely brilliant day of migration-watching, vis migging and sea-checking today. First of all I must mention the absolute highlights: the year's first HOUSE MARTIN - circling above my house at 18.05 pm (very exciting) - and just a few minutes later a flock of 10 COMMON CRANES migrating past (even more exciting!). The Cranes appeared to be coming from the west and headed straight SE towards Trieste (see above). This is the 3rd record of the species in the patch (all three times spotted from the comfort of my home).
During the day the weather was awful with a bad fog on the sea and an almost constant, very annoying drizzle. Despite this, I also managed to add two completely new birds to my patch list. Thus, special mention goes to the 65 SHELDUCKS resting on the sea (6 at Grignano, 45 Miramare and 14 Barcola) and two fly-by REED BUNTINGS (over Grignano). The patch list now stands at 155 birds.
In short, other species of note today included: 1 Song Thrush (first of the season), 200 Starlings, 2 Sandwich Terns, 1 GREYLAG GOOSE (flying NW), +100 Common Gulls, 1 Hawfinch, 1 Kestrel (from home), 2 Water Pipits, 4 Grey & several White Wagtails, 1 Marsh Tit (garden), 21 Woodlarks (came in from the sea), +10 Med Gulls, 9 Black-necked Grebes, 2 Red-breasted Mergansers (still present), 2 Great Crested Grebes and 1 Red-throated Diver.
In the evening there was also the usual duck-show on the sea (watched from my balcony) with a nice flock of +70 birds that included several PINTAILS and SHOVELERS. Both species were identified by their body, head and tail shape in flight. The other ducks were most probably Garganeys, but the light was too bad to tell.
Med Gull 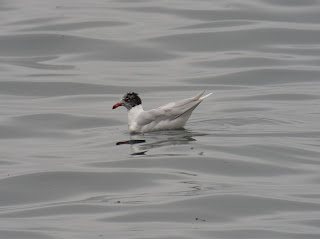 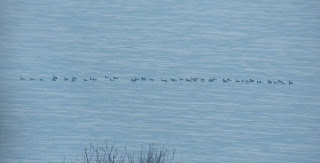