First Tufted Ducks for the patch 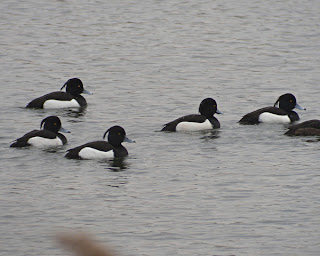 Local patch: seems strange but it's true that Tufted Duck hasn't been recorded in the patch until today. Well after all, the species is not such a sea-loving bird, so the only way to see it here is possibly on migration. This afternoon I found 8 TUFTED DUCKS resting on the sea in tight flock. Four were males and four females. This record rises my patch list to 153 species. Not bad.
Lots of other ducks were present on the sea, as the other day, but I had no chance to identify the distant flocks. Some closer ones were probably Wigeons.
Otherwise good numbers of Common Gulls are still present in the gulf, as well as some fly-by Mute Swans (15 yesterday).

Today in the town of Koper I was greeted by an urban Crested Lark, running around the parking area and hiding under the cars! It used to be an everyday sight in Koper, but in the last years Crested Larks have seemed to disappear...
Posted by Domen & Sara at 12:07