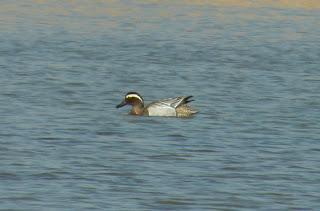 Local patch: I'm finally glad to announce the arrival of spring! In the last couple of days there's been some kind of early movement; for example a flock of Wigeons heard flying over my house at night. Today instead I checked the sea for any other ducks and found 4 drake GARGANEYS - the firsts this year! The birds were floating in tight flock, not too close to shore, so to view them well I had to descend to the quay. Also on the sea were 3 Mute Swans, a large number of Common Gulls (I counted 43 roosting birds), 3 Black-necked and 4 Great Crested Grebes all in breeding plumage.

Yesterday at Škocjanski zatok NR some early migrants were around in the form of 45 Lapwings in the lagoon and good numbers of Skylarks on the grazing marsh (+30 birds). Raptors included a ringtail Hen Harrier quartering over the reedbeds, a fly-by Peregrine and a Sparrowhawk (catching an unfortunate Reed Bunting). The White-fronted Goose was still present within the flock of 4 Greylags and other birds included 7 Tufted Ducks, 6 Pochards, 1 male Gadwall, a few Snipes, Curlews and so on. A Water Rail showed well and close in a ditch by the path, oblivious to the people passing by.
Posted by Domen & Sara at 10:01