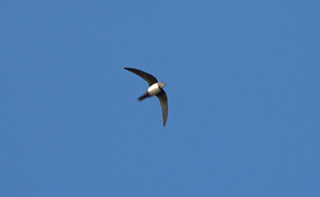 Local patch: first day of spring (officially) with some warm and glorious sunshine. Done a bit of vis migging from home and got a few interesting species. The first ALPINE SWIFTS of the year were of special note - 1 seen at midday over the cliffs and 4 together migrating SE at dusk. A small group of 4-5 House Martins was also nice to see migrating overhead (but still no bigger flocks). Raptors included 1 Goshawk (patch year tick), 2-3 Sparrowhawks, 6 Common Buzzards and 1 Kestrel. Flying along them were two Ravens, frequently mobbing the raptors, as they rose up from the pine woodland.
Also a Marsh Tit in the garden (increasingly regular), a few Nuthatches singing in the neighbourhood, 1 Grey Wagtail and still a nice mixed raft of gulls floating on the sea (+200 ind), mostly Black-headed but also Commons (both very vocal).
A few butterflies were also around in the sunshine, but I only managed to ID a Red Admiral though. Noticed some nice spring wildflowers in some pieces of wasteland and abandoned gardens, like Ranunculus ficaria (Lesser Celandine), Vinca minor, Chelidonium majus and a couple of violtes.
Posted by Domen & Sara at 11:22