Back to winter with the thrushes 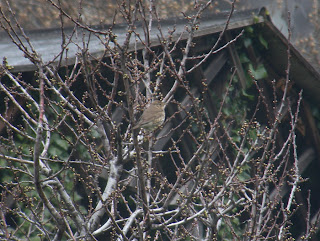 Local patch: I've never witnessed such a crazy weather in March! Today I woke up again in a really wintery scenario with very strong and freezy NE winds and a thin layer of frost covering almost everything from trees to buildings. Needles to say I haven't got much to report, but some thrush movement is going on these days. There's a good influx of Song Thrushes with up to 6 seen flying past in half an hour (today and also yesterday). Some landed in the gardens and showed well while perched or feeding on the lawns (see above - purely documentative pic). Yesterday I also got 5 Mistle Thrushes flying past - a bird that I usually see when the weather is really terrible up on the Karst and drives the birds down to the coast.
Yesterday actually it was a bit livelier with also 1 female MARSH HARRIER blown by the wind over the coast (seen struggling over the sea later), 1 lost female Kestrel (flying above the rooftops) and a flock of 7 Woodpigeons (out of season for such a number). Several Chaffinches are back in the garden as if it is winter again.
At the moment of writing it's snowing quite heavily outside and the snow is accumulating on the ground.
Hopefully this will be the last cold spell of this long winter...
Posted by Domen & Sara at 07:48