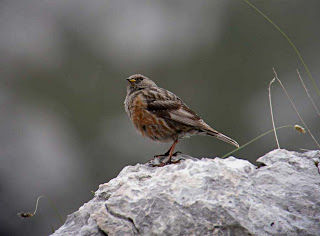 Local patch: a miserable day weatherwise, with rain and fog. I thought it might be a good idea to check the cliffs in the afternoon for any potential migrants stopped by the bad weather. So there I went. As predicted, the situation was quite lively in the bushes along the path and on the steep rocky slopes. Most were common migrants though: 7 Black Redstarts, 8 Goldcrests, 10 Chiffchaffs, 5 Song Thrushes, 1 Mistle Thrush and lots of Robins & Chaffinches. After the rain had stopped (just for a few minutes) the whole woodland came into life with singing birds including Nuthatch, Short-toed Treecreeper, Blackcap, Green Woodpecker and so on.
One of the major highlights was a juvenile Peregrine soaring around the cliff faces and "interacting" with the local pair of angry Ravens.
The best came at the end though, when I decided to have a look on a steep rocky slope where there was some movement. The movement was actually produced by two Black Redstarts and a flock of 6 ALPINE ACCENTORS feeding among the grassy tufts and rocks. The accentors were quite mobile (and vocal) and soon flew off further down along the karstic ridge. However I managed to have some good views on three birds that were the most showy.
Alpine Accentor has been reported a few times here in winter but I actually never managed to see it. So now it finally goes on the local patch list (156th species!). The above photo is from Mangrtsko sedlo in Slovenia (Julian Alps).
Interesting to see was also a Wild Boar walking around the woodland and visiting the garden of a nearby house.