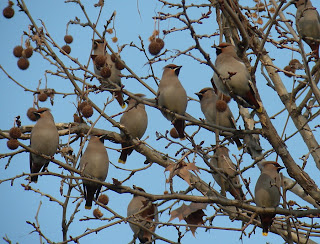 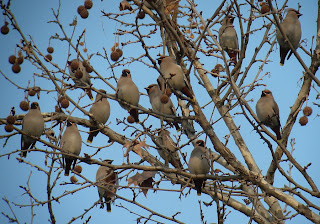 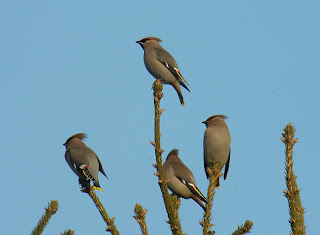 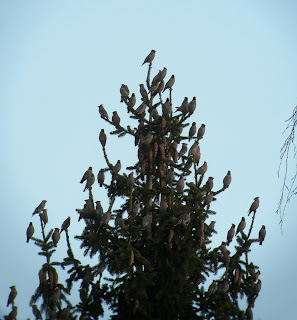 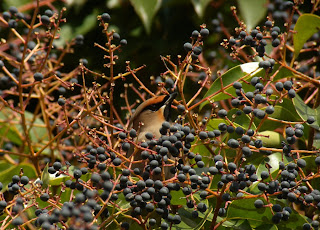 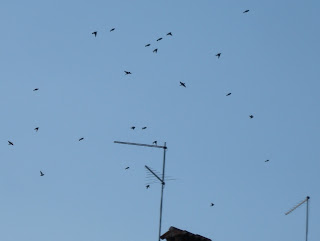 Back again in Udine today for some additional Waxwing action. Just couldn't resist the call of the magic trill! The birds are now to be seen all over the town in different places, even if the bigger flock is still hanging around the southern suburbs, where I left it last week.
The main square in Udine (Piazza Primo Maggio) held the first WAXWINGS of the day - something about 20 birds feeding on a privet tree, which gave excellent close up views. They interchanged a few seconds of feeding frenzy to several minutes of resting on the nearby lime-trees.
In the southern part of the city (roughly the same place as last time) there was a bigger show going on, with up to 150 or more Waxwings perched on the highest plane-tree and trilling loudly. Nearby was a big garden with several privets and the birds were doing regular sallies for the berries. A nice spectacle, watching them flying overhead (last pic above) and assembling in dense flocks. At 16.20 in the afternoon the whole flock took off and headed somewhere north, maybe to roost. All in all about 200 birds seen during the day.
Also today some unusual urban birds were around in the form of a Redwing on a busy street and some Siskins, plus the numerous Hawfinches (including lots of singing birds) and a few Blackcaps.
Posted by Domen & Sara at 11:02