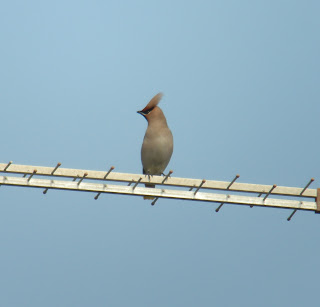 Here's a short video I made in Udine the other day, starring the Waxwings feasting on the privet tree. Also a pic of a bird with erected crest, sitting on a TV aerial.

The past few days have been pretty calm with much of the time spent in the patch and around Trieste, looking for potential Waxwings in urban and suburban habitats. I'm now quite regularly checking the sites that were used by Waxwings during the invasion in 2005. Meanwhile, smaller flocks have been present almost everywhere around Udine and also in Cividale del Friuli. So, they are getting closer to Trieste!
The local patch is otherwise quiet with the most interesting birds involving a stunning breeding-plumaged Red-necked Grebe in the bay of Grignano. The sea there usually holds a few Red-breasted Mergansers, as well as the commoner Black-necked and Great Crested Grebes which are widespread along the whole patch's coast.
Interesting birds in and around the garden these days have included: 1-2 Bramblings (passing overhead), 1 Siskin (overhead as well), 6 Woodlarks (on Friday, when we had snow once again) and small parties of Hawfinches perching on the nettle-trees. Also still around, visiting the birdfeeders are Coal, Blue and Great Tits, as well as Dunnocks and commoner species.

This past week I also had the Shag roost count at Debeli rtič in Slovenia and the highlight there was an adult Lesser Black-backed Gull on the buoys, along with a Fieldfare in the trees.
Škocjanski zatok NR was also quiet on Thursday and the most interesting species were 1 Peregrine hunting over the marsh, 1 juv White-fronted Goose (grazing with 4 Greylags), 1 adult Herring Gull (in the lagoon) and 6 Lapwings.