Woodlarks in the garden 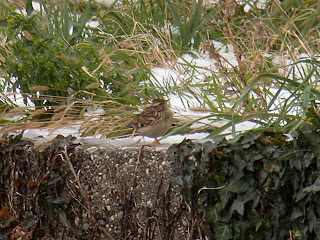 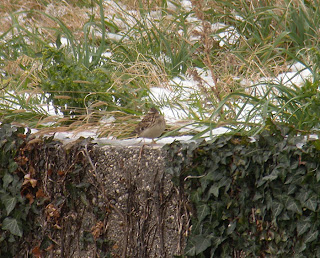 Local patch: yesterday we had a snowy night once again and this morning the patch was covered in a soft white carpet. Actually the quantity of snow on the ground was really miserable here at my home, but on the Karst it was enough to push the usual flocks of Woodlarks down to the coast. To my immense joy, today early in the afternoon, the first birds I heard when I stepped out on my terrace were WOODLARKS. A flock of at least 15 birds went by, flying low over the rooftops, before dropping down into a nearby open garden with some rough vegetation (above is a single bird, part of the flock). The flock remained there for at least an hour, probably feeding on some small seeds. Sometimes one or two birds took off and made a few flights around the neighbourhood. The same area actually attracted also a numerous flock of Chaffinches, a few Goldfinches and some Cirl Buntings (1 male & 1 female seen).
Another highlight of the day were 3 Mistle Thrushes flying in front of the house, over the suburban area. Nice to see was also a flock of 7 Hawfinches, 1 suburban Buzzard (perching on a chimney), a few Black Redstarts and...star of the birdfeeder today: a male Greenfinch.
Posted by Domen & Sara at 12:15