Wintertime in the marsh 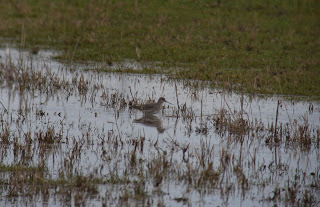 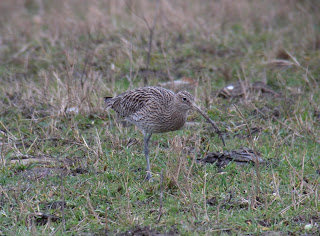 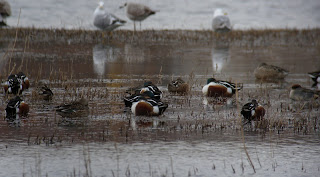 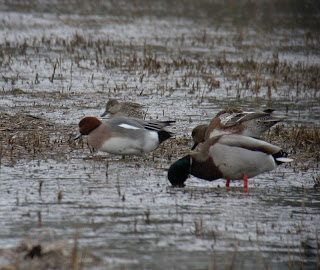 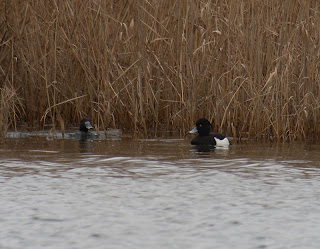 Škocjanski zatok NR: today was a cloudy and not particularly special day on the reserve. Water levels were very high in the brackish lagoon, so the freshwater part was invaded by all those lagoon inhabitants. 12 Greenshanks were present on the grazing marsh in front of the first screening. Among them was also a nice Spotted Redshank - a quite unusual bird for the season. Most Curlews were also feeding on the grassy patches in the freshwater marsh, along with grazing Wigeons and Mallards. Quite a lot of drake ducks were performing their courtship display as spring is getting closer day after day. The most interesting "pieces" of wildfowl included 1 female Gadwall (present also during the last two weeks), 2 Tufted Ducks and 6 Pochards. But strangely still no Goldeneyes here.
Coots numbered 604 birds and also the 2 Greylag Geese were still present, though there was no sign of the White-fronted Goose flock.
There was an awful lot of gulls in front of the last screening, but today I didn't really bother to find a Caspian or whatsoever. About 25 Common Gulls instead were obvious.
The reedbed held the usual flocks of Penduline Tits and Reed Buntings, but still no Bearded Tit or Bittern (...this is almost dreaming).
By the reserve's "feeding site" it was interesting to see the hunting technique of a female Sparrowhawk which walked on the ground under the thick bushes, stalking small birds in the grass.
However there ARE good birds around: one of the wardens reported me that three Long-eared Owls were seen earlier this morning, while still dark and a female Merlin was seen here on Saturday, by one of my friends. It's just a matter of luck!
Above some pics from today (top to bottom): Spotted Redshank, Curlew, Shovelers, Wigeons and two Tufted Ducks.
Posted by Domen & Sara at 06:33