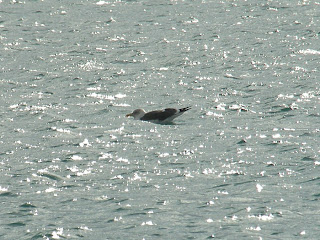 Local patch: the LESSER BLACK-BACKED GULL is back! The bird was first seen by an observer early this morning, so later I went to have a look. I found it swimming on the sea (above), not far from Miramare.
The bird is an adult and most probably is the well-known wintering bird, returning to the area year after year (first seen in 2004-2005 if I remember well).
Also around was a single juvenile Common Gull which was actually the season's first in my patch. Also quite a lot of Great Crested and Black-necked Grebes on the sea, along with a Red-necked Grebe in the bay of Grignano. No sign of any diver though. About 5 Sandwich Terns were noisily patrolling the coastline, while other birds included a single Med Gull and a few juvenile Shags. Three Siskins passed overhead, giving their calls.
Juvenile Common Gull with Black-headed Gulls 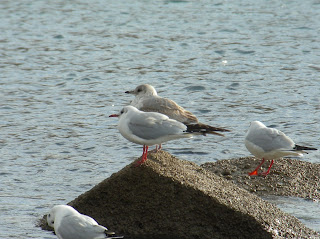 Yesterday morning my attention was caught by some bunting calls, just out of my window. I expected the usual Cirl Buntings, but when I looked up on the tree where they were perched I was delighted to find 3 Rock Buntings. Two were adults and one was probably a juvenile. Rock Bunting is a breeding species in the upper part of the patch, but a rare visitor to the gardens. This is probably the fourth time I have it in the garden.
In these days several Hawfinches are to be seen around the wider area of Barcola; usually they perch on the highest trees on view: 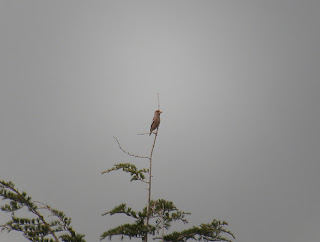