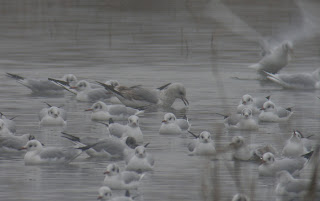 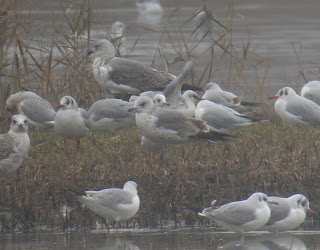 Škocjanski zatok NR: after a few weeks of absence, today I was back on the reserve for my weekly bird monitoring. Bird-wise it was rather good, despite the thick fog and miserable weather. As soon as I arrived on the freshwater marsh, a ringtail Hen Harrier put on show in front of the first screening. Then 2 Greylag Geese were discovered grazing on the wet grassland.
The lagoon and freshwater marsh held considerable numbers of Black-headed and Yellow-legged Gulls and among them I also found a few goodies. The first was a CASPIAN GULL in first-winter plumage. It was too far to take pics, but anyway a good record (first of the season). Probably there were others around, but I had little time to check properly all the gulls. The next and more obvious was an adult LESSER BLACK-BACKED GULL - still a kind of rarity here.
Last but no least came the Common Gull. First one, then two and then I counted at least 8 birds - all first winters and all resting among Black-headed Gulls in the freshwater marsh (see above).
I looked hard for the first Goldeneyes or Bitterns of the season, but with no success. Instead I found 1 Black-throated Diver in the lagoon, 2 Tufted Ducks, 6 Pochards and a nice pair of Gadwalls (uncommon bird on the reserve).
Coots today numbered 707 birds, while there were also the usual Greenshanks around, a few Curlews on the grazing marsh, Water Rail & Penduline Tits in the reedbeds ect. Not bad.
Posted by Domen & Sara at 08:36