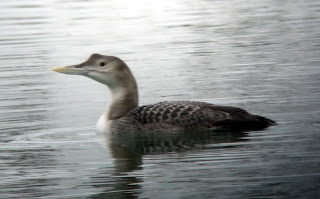 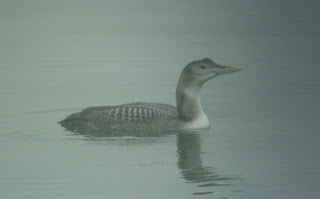 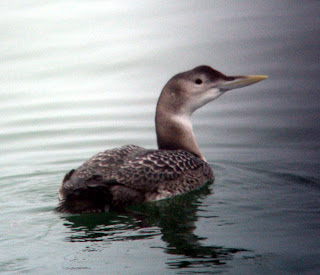 Don't worry... it's "just" a White-billed Diver. The one from January 2009 I went to see on the river Drau in Austria. A great twitch and a handsome bird. I thought I would share this pics now, during a moment of lack of updates.
Birding in the last week has been really slow...or actually non-existent. Apart for some garden checks, I didn't raise my bins for anything else really. Birdfeeder activity is a bit slower now, but still with good numbers of tits, Chaffinches ect.
I'm glad a Coal Tit is visiting regularly now. Here and there a Goldcrest in the pines, a Hawfinch overhead or a Black Redstart on the roof...that's it.
So here instead I'll write about some interesting birds that were seen around the coast, but I didn't see (last Friday onwards):
-Smew: 1 male on the Averto canal (Valle Cavanata NR) - the star of the moment
-Slavonian Grebe: 1 on the sea at Miramare on Sunday (a potential patch-tick for me), plus several others seen between Monfalcone and Grado
-Greater Scaup: both on the Averto and Quarantia canals (Isola della Cona)
-Goldeneye: good numbers on Averto, Quarantia, Isonzo river ect. I still haven't got it this season!
-Ferruginous Duck: 1 on the Averto canal, same place as the Slav.Grebe
-Golden Plover: small flocks around Fossalon
Plus usual assortment of Red-throated and Black-throated Divers, Red-necked Grebes, Bitterns, Merlins and these kind of cool winter birds.
Yesterday I learnt I also missed a Red-crested Pochard in Škocjanski zatok.
Well, I'm still not complaining at all...cause... I've seen an Otter last week and what can I ask more?
Posted by WildSlovenia at 06:07