Great day on the coast 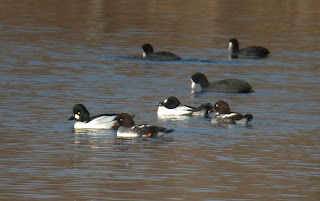 Today I had an exciting day out with lots of good-quality birds and some nice weather. I had in plan to check the coastal areas from Grado to Monfalcone and that's more or less what I did.
I started in the morning with a high tide at the wader roost on the beach of Grado. There were about 300 Curlews resting with +600 Dunlins and lots of Grey Plovers, but also at least 5 Bar-tailed Godwits, 13 Kentish Plovers and 3 winter-plumaged Oystercatchers. A good mix. The sea held the first true highlight of the day - a SLAVONIAN GREBE swimming along some Black-necked and Great Crested Grebes. Close nearby, floating on the sea I spotted a raft of 53 GOLDENEYES (the firsts of the season). Two odd Crossbills and a Siskin flew over the beach, giving their flight call.
All the stretch of sea between Monfalcone and Grado was actually stuffed with Great Crested and Black-necked Grebes, along with groups of Red-breasted Mergansers, Goldeneyes and Wigeons.
The next stop was Valle Cavanata nature reserve where I was quite surprised to find 5 FLAMINGOS resting on the main scrape (see pic). The reserve is a good place for the species, but usually they only appear in single figures. Another good bird here was a Spoonbill - very scarce in winter.
Flamingos and Great Egret 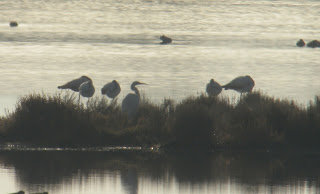 The Averto canal, which marks the end of the reserve, provided some additional highlights. Goldeneyes here were particularly tame and gave brilliant views (see also above): 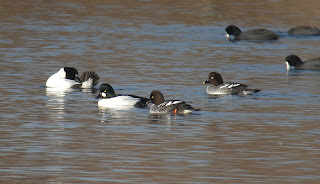 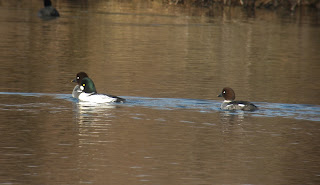 There were about 500 Pochards resting on the water and among them I also found the beautiful drake SMEW (reported here two weeks ago) which showed well, even if a bit distant. Two female Scaups were escorting it around and also a few Tufted Ducks were present.
Smew with female Scaup 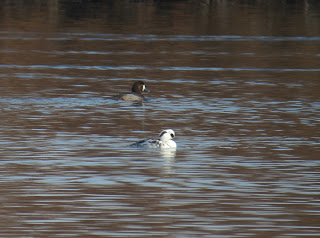 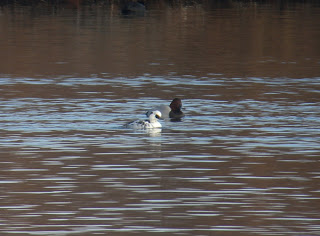 Later in the day I went to Isola della Cona NR. Before visiting the main freshwater marsh, I planned a small "Jack Snipe mission" which proved to be successful. In and area of wet meadow (Juncus growth) I first flushed 4 noisy Common Snipes and eventually also a JACK SNIPE. It flew off silently, literally from underneath my feet, before dropping down again in a nearby marsh.
The reserve held the usual variety of ducks and geese (incl. 450 White-fronted Geese) plus: 2 BITTERNS (firsts of the season for me), 1 Green Sandpiper, 2 female Goldeneyes, 3 Tufted Ducks, 1 Pochard, 2 Hen Harriers (male and female), +100 Lapwings, Marsh Harrier and other seasonal stuff.
To round up the day nicely I also had a look around Marina Nova - close to the harbour of Monfalcone. The sea here was again really productive with a nice group of 13 VELVET SCOTERS, 4 Black-throated Divers, 1 Red-necked Grebe, a few Goldeneyes and then an astonishing 4 SLAVONIAN GREBES (fishing together in one of the harbour's main canals).
A ringtail Hen Harrier quartering over the nearby reedbed at dusk was the final bird of the day.
One of the Velvet Scoters 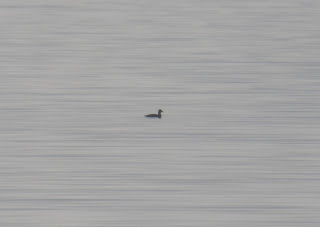