1st December - local patch and beyond 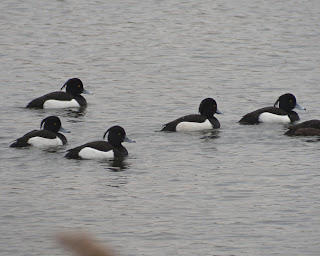 Local patch: Today was cold and windy. A true winter day. The Alps and higher hills were already covered in snow. My morning started in the garden with a Coal Tit feeding on the sunflowers seeds and a Blue Tit on the feeder. By mid-morning I joined a friend down at Miramare and together we started to work the coast, to continue then out of the patch area and towards Monfalcone.
In "patch waters" the biggest surprise was a male COMMON EIDER floating on the sea in the bay of Grignano. On the breast it had a nice pinkish wash. Actually the second record of this bird in the patch, so kind of a local rarity. Not a bad start!
The sea also held 3 Red-necked Grebes (1 Miramare, 2 Grignano), 9 Black-throated Divers (4 Miramare, 5 Grignano), 2 Red-breasted Mergansers, 8 Sandwich Terns, 1 Cormorant and the usual Shags, which now seem to be in full breeding mood, as they frequently perform an extravagant display.

We then checked some coastal points between Monfalcone and Grado, but the most interesting seemed to be the canals in which all the divers, grebes and wildfowl have moved due to the strong northeasterly on the sea.
The Averto canal near Valle Cavanata NR was the most productive with up to 385 Pochards, 5 SCAUPS (3 males & 2 females - see below), 8 Tufted Ducks and a lot of Coots resting on the calm water. 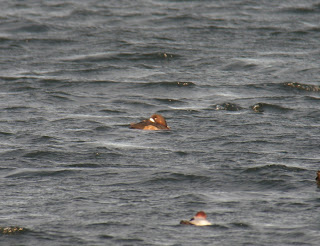 Here and there, other interesting sightings included: +40 Red-breasted Mergansers, 9 Black-necked Grebes, 1 Red-throated Diver, 2 Black-throated Divers, 2 Hen Harriers (female), 10 Snipe, 10 Grey Plovers, 30 Curlews, 1 Peregrine (hunting Starlings), 1 Black Woodpecker (calling from the poplars along the Isonzo river), 27 Tufted Ducks (Quarantia canal), Green Sandpiper (roadside ditch at Terranova), 1 Marsh Harrier, 20 Lapwings and 3 Dunlins.
A nice trio was that of 3 Phalacrocorax species seen on the Quarantia canal: Cormorant, Pygmy Cormorant and Shag (which is actually rare inland).
In a nearby area of wet grassland we tried a "Jack Snipe flush" with wellies on, which unfortunately didn't work too well. However we flushed 4 Common Snipes.
On the fields of Fossalon I also discovered a large flock of the local wintering geese. Most were Greylags, but good numbers of White-fronted Geese were present as well. There were about 1000 individuals in total, but others were constantly joining. I presume some of these must have come down from northern Europe and Siberia quite recently.
But as every winter... the best has yet to come! Or so I hope...
Posted by Domen & Sara at 09:50