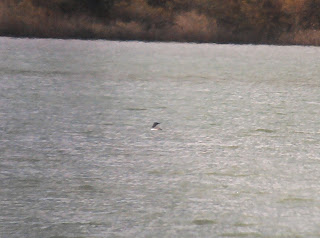 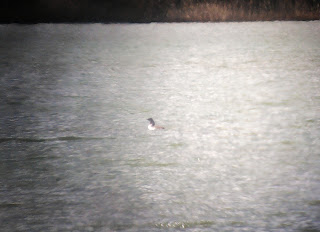 Škocjanski zatok NR: two relaxed hours spent on the reserve this morning, where some ringing was going on. I checked the nets with the wardens and top ringing-birds were 3 REDWINGS. After the release, the birds remained in the hawthorn hedges for some time and allowed good views as "wild birds". Other interesting captures included 3 Snipes, a Water Rail and some Bramblings.
In the brackish lagoon a RED-THROATED DIVER was seen earlier this morning, so I went to have a look at it. I found it floating right in the middle of the lagoon, along a few Pochards and the usual Black-necked Grebes. This is the second ever Red-throated Diver for the reserve after the renaturation process. It used to be a more regular sight here, when the lagoon used to be part of the bay of Koper - directly part of the sea (decades ago). Above is a phone-scoping attempt... 3.2 pixels are clearly not enough.
In the hedges there were some showy Hawfinches and a few Bramblings were also around. Siskin & Linnet passage quite good as usual in these days.
Posted by Domen & Sara at 10:50