Good birding in the fog 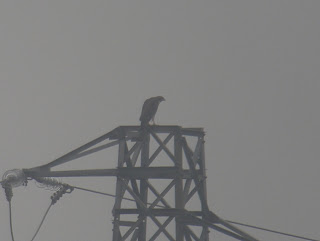 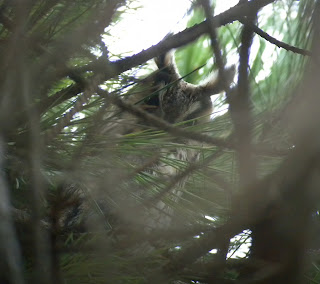 After a meeting of the local bird organization in Palmanova, me and a couple of friends had a few hours of birding in the area of Bosco San Marco near Aquileia (UD). Despite the miserable, damp and foggy weather, we managed to find some interesting birds. A Great Grey Shrike on the top of some wires greeted us as soon as we arrived. The fields held also Meadow Pipits, Stonechats, Skylarks and Linnets. Shortly afterwards a massive female Goshawk was spotted perching on the top of a pylon (see 1st pic above). It is quite unusual to see this big predator perched on such an exposed place. Even if a bit far and in the fog, we had good views of it for about 15 minutes.
In the small pine woodland on the top of the hill, I insisted to check carefully the trees for any roosting owls... And after a while I was soon watching the distinctive silhouette of a LONG-EARED OWL. The bird was asleep, but slightly to the left another LEO was well awake and staring down at us (2nd pic).
Finally we checked the exposed mudflats of the nearby lagoon where a flock of +300 Dunlins was feeding along with several Redshanks, +50 Grey Plovers and Curlews. Mixed among them were also at least 14 KNOTS.
A nice ending to an otherwise boring and foggy Sunday!
Posted by Domen & Sara at 08:35