First Fieldfare of the season 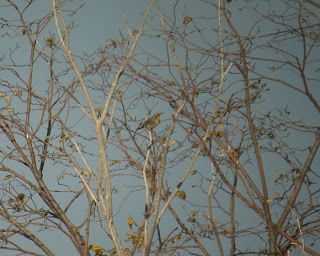 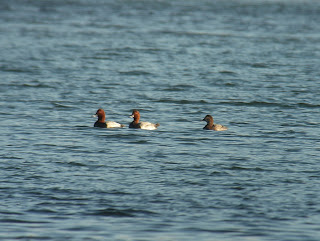 Škocjanski zatok NR: typical winter birds are starting to appear around. The first FIELDFARE of the season was perching on top of the highest tree in the marsh this morning (see pic). Quite strangely, a solitary bird. Wildfowl numbers and variety are building up. Today the most notable sighting around the reserve included: 49 Wigeon, 48 Shoveler, 229 Teal, 5 Pochard (see 3 of them in the above photo), 9 Tufted Duck (mostly in the lagoon), 1 Red-throated Diver (still present in the lagoon), 1 Black-throated Diver (a new arrival to the lagoon and also a rare bird here), 525 Coot, 1 Lapwing, several common waders (Greenshanks, Curlews), Skylark, 12 Water Pipit, Penduline Tit, Reed Bunting.
While driving from the reserve to Koper I spotted a "white fluffy ball" on a nearby fence. I stopped the car, had a look at it and confirmed my initial thoughts: Great Grey Shrike. Nice one!
Posted by Domen & Sara at 07:52