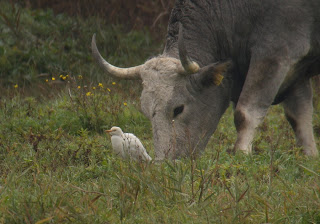 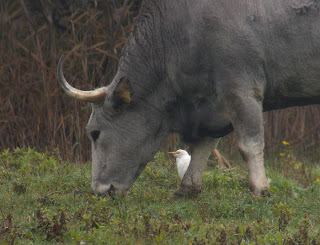 Škocjanski zatok NR: the local highlight today was a Cattle Egret. It was quite of interest because it was a year's first for the reserve. It is still a scarce bird in Slovenia and usually autumn is not the prime season for the species. Although in nearby Italy it's becoming an increasingly common sight through the winter months as well.
Other birds of interest today included 1 Black-throated Diver & 1 Bar-tailed Godwit (both still present in the lagoon) and 1 Shelduck (freshwater marsh). Also some more Snipes around, feeding along with a few Curlews on the wet grassland (freshwater part). Wildfowl numbers as usual: 59 Shovelers, 205 Teals, 54 Wigeons and 7 Pochards. No sign of any Tufted Duck though. About 668 Coots counted.
Also a nice Water Rail seen moving around on the mud and other usual birds of the area like Penduline Tits, Reed Buntings ect.
The Great Grey Shrike just out of the reserve was also still present today. Hopefully it will overwinter in the area.
Posted by Domen & Sara at 07:57