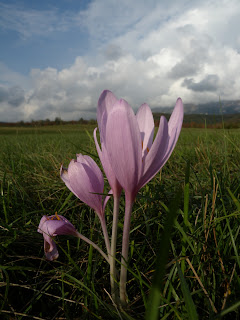 Local patch: nothing truly exciting in the past days here, although some late-autumn migrants are around and about. For example I had one or two SONG THRUSHES flying over (and in) the garden, which is quite good. Also a Dunnock was heard, usual Coal Tits present, a Tree Pipit (went by today) and Grey Wagtails seem to be fairly regular now. Black Redstarts are getting commoner, as always in autumn. And of course Robins are now everywhere, singing their hearts out. I noticed a slight increase in the Blackcap numbers as well.
Yesterday three Alpine Swifts were still present along the Karstic ridge and a flock of 25 Swallows went past (heading S) in the evening. Most were short-tailed juveniles.

Yesterday I also had a quick visit at Škocjanski zatok which held the expected autumn migrants. Siskins were constantly flying overhead, along with a few Tree Pipits, Chaffinches, 1 Skylark, Hawfinch and Linnets. Also a small flock of Meadow Pipits was on the grazing marsh, sharing the feeding site with 5 Stonechats and 5 Whinchats. At a certain point a migrating flock of +70 Woodpigeons flew overhead, followed by a few Swallows. Smaller passerines and sylvias in the hedges included 5 Reed Warblers, 1 Chiffchaff, 1 Willow Warbler, 1 Sedge Warbler and tons of Blackcaps (now the commonest migrants along with Dunnocks). Also a male Garganey, clearly moulting to "decent" plumage, a few Penduline Tits and Reed Buntings. Typically autumn!

I had some sort of update on the local patch birds list (which can be viewed here), especially on the species' status. I also added a short list of birds which I haven't seen, but were recorded by other observers in the patch area.
So the list is now fully updated and corrected and officially stands at 150 species.

The photograph shows and autumn crocus (Colchicum autumnale) - one of the typical plants that bloom in autumn. It's quite commonly found on the Karst in this period.
Posted by Domen & Sara at 07:21