Larks over the house 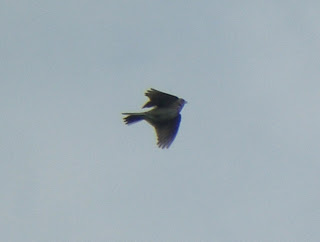 Local patch: nice sunny and windy weather brought some good birds to the patch this morning. A bit of vis mig from the balcony was quite productive for the short time I was out. The most interesting were 2 WOODLARKS flying low above the rooftops, heading E (calling as they went). They were followed shortly after by a flock of 5 SKYLARKS that flew N instead. The above pic is just illustrative.
Later a MISTLE THRUSH flying over the woodland's treetops was also of note, along with 2 Song Thrushes in the garden area, 1 Linnet (flying past), 5 Woodpigeons (heading SE), 1 Serin, flock of Siskins and usual other garden stuff. Coal Tits, Dunnocks and one or two Goldcrests now seen on a daily basis.
A few days ago I saw again a JACKDAW flying NW over Barcola. Always flying quite high up in the sky. Where they go it's still a mystery.
Posted by Domen & Sara at 08:18