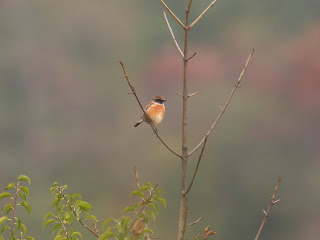 Today I had a guided walk around Isola della Cona in occasion of the Eurobirdwatch (European day of birdwatching). The weather was a bit miserable, but a good number of common/regular species was on show. Highlights included: 1 Avocet, 1 Hobby, 21 Dunlins, 3 Little Stints, 3 juv Ringed Plovers, 1 Grey Plover, several Water Pipits and general passage of migrants. Siskins were heard on a regular basis, while a few Swallows passed overhead. In the bushes quite a lot of Chiffchaffs, Blackcaps and Garden Warblers, then 1 Lesser Whitethroat, Penduline Tits, 2 Sedge Warblers, a few Willow Warblers and so on. Also about 2500 Wigeons feeding on the sea grass Zoostera noltii on the coast towards the estuary.
In the afternoon me two other friends checked the Lisert area and found 2 late RED-RUMPED SWALLOWS still around the breeding site. One was an adult, the other clearly a juvenile. The latter nearly ended its existence in the talons of a hungry Sparrowhawk, which performed some incredible stoops in front of us. Fortunately the swallows was quick enough to escape from the predator.
Both Red-rumped Swallows remained on show for the whole time we were there and even perched on the top of a nearby sailboat.
Otherwise the area was a bit calm and silent. Another Hobby was of note, along with 1 male Stonechat, 1 Wryneck (in exactly the same bush where we saw one last Sunday), a flock of Skylarks, Tree Pipits on passage, 1 Black Redstart, 1 female Marsh Harrier, Penduline Tits & Water Rail in the reedbed and a load of Chiffchaffs in the hedges. A grasshopper I never saw before was also interesting to see. Its name is Acrida ungarica and is shown in this pic: 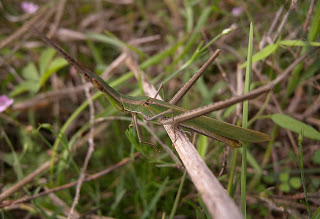 We ended the day at the Karstic lake of Doberdob, checking the woodland area around the lake (pics below). A Black Woodpecker was calling from the poplars, along with a nervous Lesser Spotted Woodpecker and some other woodland species (including Hawfinch). The nearby heathland held a few Woodlarks, 2 male Stonechats, some Rock Buntings and a calling Sardinian Warbler. More or less all the specialities of the area! 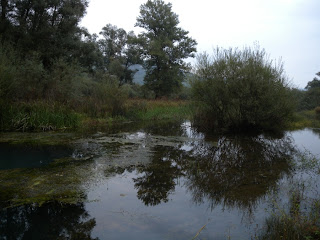 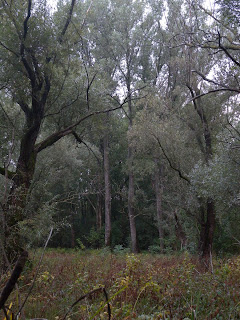