Pallid Swifts from the house 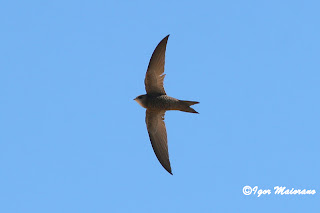 Local patch: I went out on the balcony today for a late check at midday. After a Short-toed Treecreeper showing well in the garden and some overflying Grey Wagtails, I was delighted to the sight of 2 PALLID SWIFTS on migration. After I spotted them high above the Karstic ridge, I followed them with the scope, until they passed over the house, heading south-east.
A few days ago I had a similar encounter with two doubtful (very pale) swifts, but they just remained as two Swift sp. Today instead there was no doubt about the identification, as I managed to obtain good views of them, when they passed overhead. Quite striking was the colour of the upperparts, being chocolate-brown and identical to that of Alpine Swifts. On closer views I realised the underparts were very pale as well, forming the distinctive contrast between some lighter and some darker wing feathers.
Actually a third bird appeared later over the house and showed better then the first two.
So the tally for today stands at 3 Pallid Swifts, being the 2nd ever record for the patch! Probably an underestimated species.
Also one or two Coal Tits still present in the garden (visiting the conifers on a daily basis), a Hawfinch (heard), some House Martins forming small flocks high overhead and a constant movement of Jays (flying in and out of the woodland, or following the coastline).
Above Pallid Swift by Igor Maiorano.