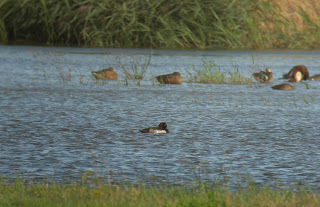 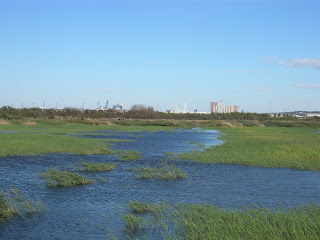 Škocjanski zatok NR: despite the promising weather conditions, today the situation was a bit bleak. There was a strong cold northeasterly that could have been pretty good for vis-migging. Instead the only true passage migrants were House Martins (+200) and Swallows (100) in constant flow, usually following the coast line.
There was a pretty winterish feel as well, with increasing wildfowl numbers on the freshwater marsh: 19 Wigeons, 34 Shovelers, 1 female Pintail, 108 Teals, 1 male Tufted Duck (above) and lots of Mallards. Also a male Garganey flying around was pretty obvious.
Waders were literally absent, except for the usual Greenshanks and the hedges were of course impossible to work because of the wind. Small migrants included 1 Wheatear and 1 Whinchat on the grazing marsh, plus a single Yellow Wagtail.
Six Jackdaws flying around were also of note.
Second pic above shows a view over part of the freshwater marsh, with Koper's port in the background.