Migrant boom in the garden! 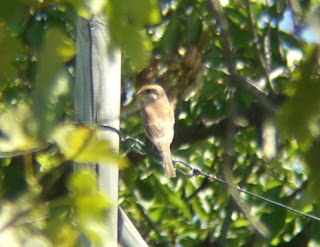 Local patch: an excellent day in the garden migration-wise. In the course of one hour in the morning I managed to pull out almost all the common migrants (usually present around in this season). I've actually never seen all this species together in the garden before.
There seemed to be a pre-migration feeding frenzy on the plum and fig trees with: 1 ICTERINE WARBLER (best bird of the day), 2 Lesser Whitethroats, 2 Common Whitethroats, at least 2 Spotted Flycatchers (doing their favourite thing: fly-catching), 1 Pied Flycatcher, 1 juvenile RED-BACKED SHRIKE (it's been quite a few years from the last one in the garden), 1 Garden Warbler. Most of this migrants were the autumn's first records of the species in the garden area. Also a male Blackcap was around, along with several Blue Tits (now a regular garden visitor), a flock of Long-tailed Tits, one or two Coal Tits (heard on a daily basis), 1 Grey Wagtail (passing overhead, calling), 1 Nuthatch (heard), 1 Woodpigeon, 1 female Sparrowhawk (above the woodland's treeline) and several Jays (common daily visitor). About 8 Alpine Swifts were around Monte Grisa and several House Martins were passing overhead (15-20).
The last Red-backed Shrike in the garden was the bird in the above pic, photographed in August 2008.