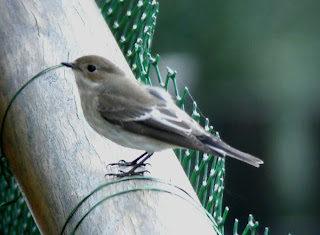 Local patch: a really good passage this morning in the garden areas and overhead. It seems the northeasterly and low clouds are doing a good work to stop some migrants in the area. Two WHINCHATS sitting on the cherry tree were a good discovery, along with 1 Spotted Flycatcher & 1 PIED FLYCATCHER at the edge of the woodland plus several Willow Warblers flitting through the canopies of the bigger oaks. A Nuthatch was nice to see on the top of a pole, mobbed shortly after by the Pied Flycatcher. Also lots of Blackcaps around with 1 Great Spotted Woodpecker and small flocks of tits.
Vis migging was also quite productive with a steady flow of Swallows and House Martins flying overhead. Among one of the flocks I managed to pick out 2 SAND MARTINS - representing the second record for the patch. They flew west with the rest of the flock. A few Alpine Swifts are still present around the cliffs. Also several small passerines seen flying far overhead. I managed to identify just a few TREE PIPITS from their calls and spotted one flying west.
Raptors included 3 Common Buzzards and 1 Sparrowhawk... a bit poor.
Posted by Domen & Sara at 04:23