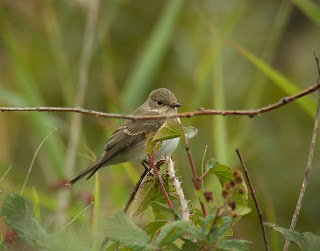 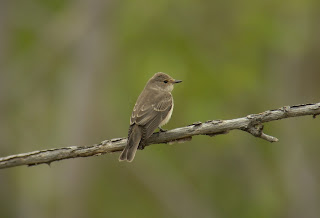 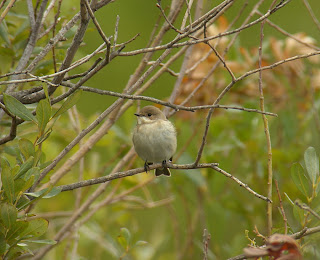 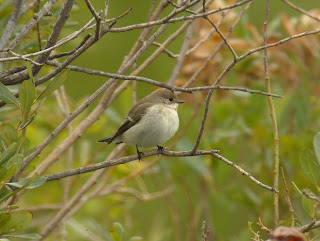 Well, it all began when I was birding calmly on my own at Lisert and I got a call from another guy who was nearby at Isola della Cona. He had just seen an Eleonora's Falcon flying towards the sea! This ruined all my initial plans to work slowly and quietly the hedges in search of scarce small migrants.
I quickly headed to the Timavo's estuary and had a look at the sea, in the vain hope that I could spot something falconish flying around. Then I decided to check the river Isonzo's estuary in the area of Caneo.
Before heading there I had of course a look around Lisert first, which produced a nice scattering of common migrants: 5-6 Pied Flycatchers (second two pics above), 4 Common Redstarts, 2 Spotted Flycatchers (first two pics above), 1 Robin (migrant!). On the sea in front of the Timavo's estuary I also got 3 Black-necked Grebes, 11 Curlews, 2 Common Sandpipers and the usual Common Eiders.
Later when I arrived at Caneo I discovered that the wind was stronger than I thought, so I couldn't check properly the whole estuary. So I decided to move to a sheltered place under a bank, from where I could see the extensive mudflats (there was an extremely low tide). The beach was completely covered in Curlews (several hundred birds!), Spotted Redshanks (150), Dunlins (+200) and Grey Plovers (40) - some of them still sported the summer plumage. After a bit of scanning I could also add to the wader list a KNOT (juvenile), a few Greenshanks, a Redshank and a Marsh Sandpiper. Good numbers of Wigeons (in winter plumage) were also present, feeding on the Zoostera sea-grass. A few Sandwich Terns were flying around as well.
By mid-afternoon I moved to the freshwater marsh of Isola della Cona, where I met another birder. There were good numbers of Spotted Redshanks and Greenshank roosting on the main scrape, along with 5 Dunlins, 2 Curlews Sandpipers, 1 Black-tailed Godwit, 1 Grey Plover, 5 Little Stints and other commoner birds. There was a moment of tension when an adult Hobby flew past, spreading panic among the waders. Also some small migrants in the bushes like Garden Warbler, Pied and Spotted Flycatcher and Willow Warbler.

Local patch: the other day, still present were 1 Lesser Whitethroat, 1 Common Whitethroat and 1 Garden Warbler. Also the first Robin of the season in the garden.
Still no luck with the Eleonora's...