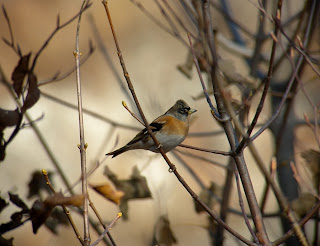 Local patch: the day began with a call from a friend that informed me of two Arctic Skuas and some Yelkouan Shearwaters off Miramare. I woke up a bit late, so was in seawatching position later than thought. From about 10.30 onwards the only thing I could see on the sea (from Miramare) was a Sandwich Tern and an adult Med Gull. There was too much haze on the horizon to spot any far-flying skua or shearwater. However I managed to see and hear some overflying migrants in the form of Siskin, Grey Wagtail, Tree Pipit, House Martin and a Chiffchaff in the bushes. A Dolphin's dorsal fin was also spotted, but was too far to identify the species.
In general today there was a strong influx of Swallows coming from NW and W and working their way southwards along the coast and the Karstic ridge.
Later in the morning I was very pleased to hear the autumn's first BRAMBLING flying over the house with some Chaffinches. The garden was also stuffed with autumn birds like Coal Tits, 1 Nuthatch, several singing Robins (a real feature of the coming winter) and a load of Jays.
Above: Brambling in Trnovski gozd - 2009
Posted by Domen & Sara at 09:44