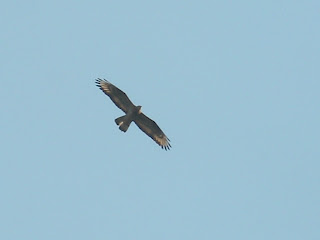 A warm afternoon spent on the grassland of "Campo Carri" represented the first autumn visit to the area this year. The skies were quite changeable with sunny sprouts and clouds coming from north and east with a stiff breeze from the same direction. I expected to see more small migrants, but the score was on the raptors instead. A SHORT-TOED EAGLE gliding past was the highlight, along with 1 juvenile Goshawk, 12 Honey Buzzards on migration (in different small flocks, all heading W), 1 juvenile Marsh Harrier, plus male and female Sparrowhawk, 1 Kestrel and 1 Common Buzzard. The resident Ravens were frequently in the air as well.
Passerines and smaller birds included: 1 Red-backed Shrike, 3 Tawny Pipits (juveniles), 2 Wheatears (including a nice male), 3 Whinchats, 1 Hoopoe and a Common Swift mixed within a flock of migrating Swallows.
Above is one of the twelve Honey Buzzards that went past.
Yesterday I went to check the hills of mount Vremščica for any Dotterels, but I was unsuccessful. Me and the other friends will have some proper search later in the week towards the 6th September - the day when we got two birds up there last year - see the post here.
I really hope to find them this year as well.
Posted by Domen & Sara at 09:39