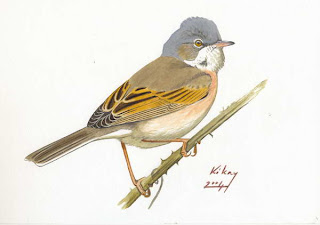 Local patch: we finally got some proper rainfalls today, so I was quite keen to check the garden in between the rain showers. There were indeed some migrants around and the best find was a COMMOM WHITETHROAT feeding on a fig tree. There was also a steady flow of Swallows passing through with single birds or small flocks. I counted about 30 birds. A female Golden Oriole showing well on a dead tree at the woodland's edge was probably also a migrant.
At 14.20 pm a juvenile Honey Buzzard came in from the sea (and flew low over the house), apparently blown by the wind or driven by the storm. Clearly not one of the local birds. Also around was a juvenile Sparrowhawk perching on a spruce and a Coal Tit in the garden.
The sea produced a high number of Med Gulls with 13 birds counted flying past and a single Sandwich Tern fishing in front of the coast.
Two nights ago I also heard a singing Scops Owl which represented the latest record for the species in the local patch.
Tomorrow I'm going to have another "migrant session" somewhere around the coastal wetlands. Hopefully the storm this evening will bring some scarce birds down!
Illustration by Szabolcs Kokay
Posted by Domen & Sara at 12:04