Red-rumped Swallows in the patch! 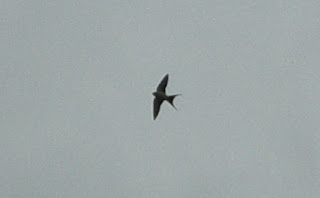 Local patch: it's getting even better down here! This morning while I was having the usual check of the patch some hirundines flying above the woodland caught my attention. So I scoped them and realised they were RED-RUMPED SWALLOWS! The second ever record for the patch and a true rarity! I counted at least 5 birds in flight that remained on view for at least 1 hour.
Other birds included a male Honey Buzzard gliding eastwards and 2 Sparrowhawks over the woodland.
The above pic is a documentative shot of the first Red-rumped Swallows for the patch in April 2008.
Posted by Domen & Sara at 03:09