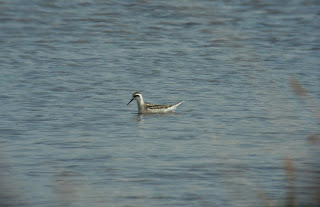 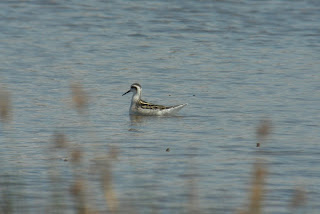 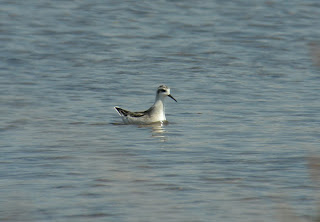 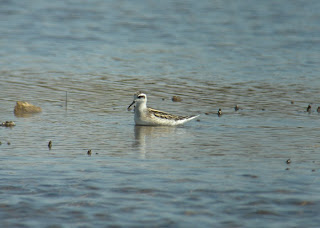 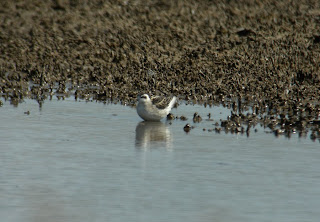 Went to see this nice little RED-NECKED PHALAROPE today. The bird was found by a friend of mine in the Caneo area on the Isonzo's rivermouth. By midday I was quickly alerted of the rarity, jumped into the car and drove to the place. I found myself on location with other two birders and together we watched the little wader for at least half an hour. We tried to approach the small muddy scrape in which it was feeding, walking in the thick mud and rush vegetation through the brackish marsh.
We got quite close to the bird that allowed excellent views. This was surely the best of the three Red-necked Phalaropes I've ever seen.
I also managed to record a short video that can be viewed here.
The brackish pond contained also a summer plumaged Curlew Sandpiper, 1 Ruff, 1 Grey Plover (winter plumage), 1 Snipe, lots of Wood and Common Sandpipers, a Lapwing, several Curlews and Black-winged Stilts. A Fan-tailed Warbler and +20 Bee-eaters were also around. Actually it is a nice little place for waders, that I rarely visit when I'm in the area.
In the afternoon I couldn't skip a short visit to Isola della Cona NR which was also alive with waders. All the main freshwater habitats were dried, except one scrape that was obviously full of birds. The best sightings included 2 MARSH SANDPIPERS (first of the autumn for me) plus all the other Tringa species, 2 Whimbrels (landed in the freshwater marsh), 10 Ruffs, 3 juvenile Black Terns, 5 Little Stints, 2 Temminck's Stints (first this autumn), 3 Black-tailed Godwits, 3 Dunlins (summer plumage), 2 Med Gulls plus most of the dabbling ducks.
Passerine migrants included lots of Garden Warblers in the hedges, along with a few Wood Warblers on the poplars, 3 Nightingales, a Spotted Flycatcher and several juvenile Yellow Wagtails on the grazing marsh.
Not bad for an unplanned afternoon's birding!