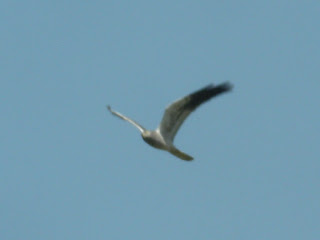 Went on the Cerknica lake today with a couple of friends (including a visiting German birder). As everywhere across Slovenia the area was very dry with hardly any water in the lake itself. The situation was pretty dry even bird-wise. Notable numbers of Spotted and Pied Flycatchers were around (the latter predominant in wooded areas) and other migrants included lots of Whinchats, several Wheatears, a few Wood Warblers and a Garden Warbler. Best bird of the day was a male MONTAGU'S HARRIER hunting above the extensive meadow areas and giving some nice close flight views (horrible pic above). A pair of Honey Buzzards also performed pretty well in front of us. Common Buzzards instead were perhaps the most numerous raptor (if not the commonest species!) with up to 50 birds seen during the day. Raptor-wise it was still a bit poor with just a brief Hobby flying past and 4 Marsh Harriers over the reedbeds.
In the sky migration was evident in the form of large flocks of House Martins with several Swallows mixed among and a single Common Swift.
A stop at Planina revealed more or less the same species, with the addition of 4 Willow Warblers (autumn's first) feeding by the side of the local stream. Also two Kingfishers nearby, 2 Grey Wagtails, but no sign of the Dipper.
Other commonest species seen either at Cerknica lake or Planina (or both) included: Hawfinch, Linnet, Red-backed Shrike, Chiffchaff, Yellow Wagtail, Raven, Black Redstart, Tree Pipit, Song Thrush, Blackcap, Common Whitethroat, 6 Common Sandpiper & 1 Wood Sandpiper (Cerknica), 5 Great Egrets and Coal Tit.
On the mammal front a female RED DEER was quite unusual to be seen trotting around on the meadows in complete daylight.
The Crag Martins were as usual at their breeding colony near Postojna and easily viewed from the main road.
Later in the afternoon, on the way back home we made a stop at the Barred Warbler site on the Karst and were delighted to see both Short-toed Eagle (drifting past) and a juvenile Goshawk being mobbed by some Ravens. Also this area held about 15 Wheatears and a few Whinchats, plus the local Woodlarks and a Skylark (heard).
Posted by Domen & Sara at 12:04