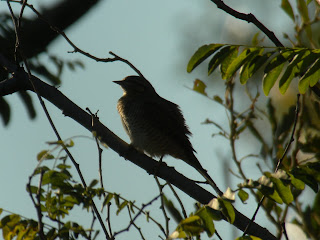 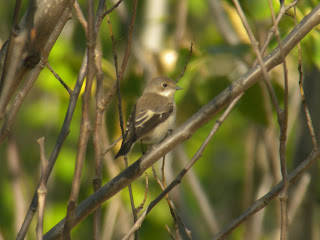 As I predicted yesterday, the atmosphere was really special this morning, with a pleasant "smell" of migration and autumn. The air was very fresh in the morning and the skies were absolutely clear after last evening's rainstorm. A really magic atmosphere. I decided that Lisert was the best place to go looking for migrants.
The hedges, bushes and poplar-trees were full of Pied Flycatchers - this was the commonest migrant during the day (2nd pic). Along with them were loads of Spotted Flycatchers and an awful lot of Nightingales whistling all around. The hedges also produced a very nice WRYNECK that showed well on a dead branch (see pic above). I found this bird more or less in the same area as the one I saw in spring.
Also an Icterine Warbler was around with nice numbers of Garden Warblers feeding on blackberries (about 10) along with 2 Common Whitethroats and a single Lesser Whitethroat. I only managed to see one Wood Warbler in the poplars' canopies.
At a certain point a male Cuckoo flew past and rose panic among the small birds (they confused it with a Sparrowhawk...actually me too!).
Other small migrants included a few Reed Warblers, 4 Red-backed Shrikes, Yellow Wagtails flying overhead flocks of Swallows and House Martins and a Turtle Dove flying overhead.
The inner pond held a juvenile LITTLE CRAKE feeding at the edge of the reedbed with some Moorhens and several Wood Sandpipers (plus ducks in the form of Teals and Shovelers).
In the same area a Water Rail sang from the depths of the reedbed, along with the usual Cetti's Warblers.
Highlight of the morning were 3 KNOTS (juveniles) feeding in the brackish marsh by the tidal creek. Close nearby were 2 Grey Plovers in summer plumage, a few Greenshanks, Common Sandpiper, 1 Curlew and 1 Whimbrel.
Later in the morning I went to Isola della Cona where a Broad-billed Sandpiper was seen a few days ago. Although I scanned all the single waders I didn't find the bird which wasn't seen yesterday either. Instead I got the usual numbers of waders including all the commonest species plus 2 Grey Plovers, 1 Marsh Sandpiper, 13 Curlew Sandpipers (mostly juveniles), flock of 10 Little Stints and one Temminck's Stint, 1 adult Ringed Plover and 3 Black-tailed Godwits.
The most interesting sighting here was a SHORT-TOED EAGLE hovering above the freshwater marsh at 11 o'clock. Later two Honey Buzzards arrived from the sea and headed west.
On the main scrape there was a big flock of Med Gulls, containing at least 100 birds.
Also here lots of migrant passerines like Pied Flycatchers and Garden Warblers and the only two Wheatears of the day.
Not a bad morning, but now I think I really need a Dotterel...
Posted by Domen & Sara at 05:47