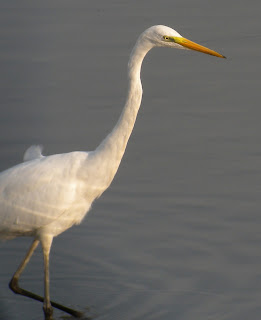 Local patch: finally something rather good to report from the patch in the form of a KESTREL soaring in the bright sky this morning. A Common Buzzard and a male Sparrowhawk were also around, enjoying the fresh and dry breeze in the air. The day seemed particularly good for migration as large flocks of House Martins and Common Swifts were passing high overhead. Mixed among them were also the Alpine Swifts from around Monte Grisa. In the evening two migrating GREAT EGRETS above the karstic ridge represented only the 3rd record for the species in the patch, so a quite good score as well (the one above was took at Isola della Cona NR). They were heading west, presumably arriving from the east.
Let the games begin!