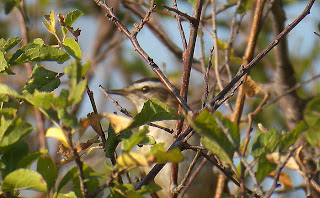 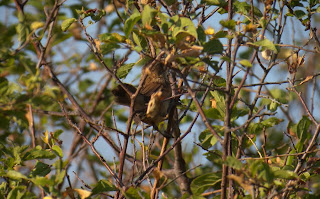 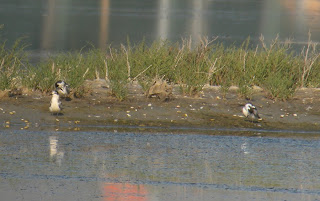 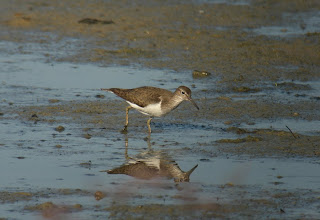 Local patch: yesterday night I added species number 151 to my patch list - a truly unexpected GREEN SANDPIPER. I heard one calling in the night sky, while I was falling asleep in my bed with the opened window. Maybe it was part of a bigger flock. Surely it was a bird on migration as are hundreds of other waders at the moment.
In the morning the odd Honey Buzzard was soaring over the woodland. Now pretty much a daily sight from the house. Otherwise all very calm around the gardens.

Škocjanski zatok NR: the August movement continues with a steady supply of the first migrants. Top bird of the day was a MOUSTACHED WARBLER giving excellent views in the bushes along the lagoon. I think it's one of the earliest autumn records of the species in the reserve. Actually this year everything seems so early!
Another bird of note was a singing Fan-tailed Warbler in the freshwater marsh - now almost a scarcity here (it used to breed years ago on the reserve). It was quite a long time from my last one...
Four juvenile Black Terns were still around - probably the same birds as last week. Other birds included: 78 Little Egrets (high number), 1 juv Purple Heron (migrant), 2 Shovelers, 2 Teals, 4 Garganeys, 5 Curlews, 28 Common Sandpiper (commonest wader now), 17 Greenshanks, 9 Wood Sandpipers, flock of 7 Green Sandpipers, 7 Snipes, 3 juvenile Med Gulls (both in the lagoon and fw marsh), 2 Common Swifts (we're running out of these now!), 4 Yellow Wagtails, 6 Nightingales, 1 Melodious Warbler and 1 calling Penduline Tit. Plus the last remaining Black-winged Stilts, Common Terns, Reed warblers ect.
Pics above: Moustached Warbler (first two), Black Terns resting in the lagoon, Common Sandpiper and juvenile Med Gull.
Posted by Domen & Sara at 06:00